Saint Teresa of the Andes

“Remember that the Heart of Jesus is your spiritual cradle. There is your nest. There Jesus sings lullabies of peace and love to you."

Juana Enriqueta Josefina Fernandez Solar (known as Juanita) was born into a wealthy family in Santiago, Chile, on 13 July 1900, the fifth of six children. Juanita was attracted to prayer from childhood, especially the rosary, which she made a promise to pray every day.  She also had a great longing to make her first Holy Communion, which she was finally given permission for at the age of ten, after much opposition.  Ten was considered young to receive the Sacrament at that time.

In 1914, she read The Story of a Soul by St Thérèse of Lisieux – who was not yet beatified – and was captivated.  Soon afterwards she felt that Christ was calling her to become a Carmelite.  In 1917 she read the spiritual writings of another holy French Carmelite, St Elizabeth of the Trinity, who died in 1906.  Also in 1917 Juanita began to be in contact with the Carmel of Los Andes but did not make her first visit there until January 1919.  She was received well by the community and confirmed in her desire to enter.  On 25 March 1919, she wrote a beautiful letter to her father asking for his permission to enter Carmel.  He was moved to tears by the letter and granted his permission, and so she entered on 7 May 1919 and was given the name Teresa of Jesus.

Sister Teresa lived in Carmel for only eleven months, with great zeal, joy, and holiness. Her vision for the Carmelite life was that it consists in three things: to love, to suffer and to pray for the conversion of sinners, the sanctification of priests and for the Church.

As a young girl, Juanita’s health had never been strong and in March 1920, Sister Teresa fell seriously ill with Typhus.  Once her death seemed inevitable, she was given special permission to make profession of vows on 7 April, an occasion of great joy for her.

She died on 12 April 1920.  Her funeral was attended by many people and her reputation for holiness began to grow immediately.

Teresa of Los Andes was beatified by Pope St John Paul II during his visit to Chile in 1987.  She was the first Chilean to be recognised in this way.  Six years later, St John Paul II canonised her in Rome.

Source: Website of the Carmelite Nuns of Great Britain – https://carmelitenuns.uk/st-teresa-of-los-andes/

Listen to a letter from Teresa to her cousin...

The official website of St Teresa of Los Andes is a rich resource with much further information about the young saint, including detailed biographies, prayers, St Teresa’s own writings, photos, videos and the texts of Pope John Paul’s homilies from her beatification and canonisation. Click here to be taken there! 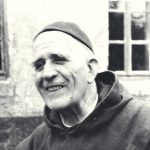