Our Lady of the Central West:
A Carmelite Iconographer's Story

My name is Mary Clancy. I joined the Varroville OCDS community (that is, lay people living the Carmelite spirit) in 2009 and made my definite promise in 2015.

I had felt drawn to iconography for quite some time, but as I lived in Bathurst, there was not the opportunity to study this. In 2011, I attended a weekend course at the Mount Carmel Retreat Centre in Varroville presented by the Melbourne iconographer Anna Prifti. In 2012, I started taking iconography seriously, working first with Anna, then with Philip Davydov and Olga Shalmova who come to Australia every year from St Petersburg.

My development as an iconographer has been closely tied to my formation and growth in Carmel. I have come to see my Carmelite vocation as one of prayer. Not only my prayer, but more importantly, helping others to pray. The main way I do this is through the icons I have written.

My development as an iconographer has been closely tied to my formation and growth in Carmel. I have come to see my Carmelite vocation as one of prayer.

The Origin of the Our Lady of the Central West Icon

When Bishop Michael McKenna (Bathurst Diocese) was preparing for his episcopal ordination he did a retreat at Tarrawarra Abbey. Whilst there he asked a monk under what title Our Lady was venerated at the Abbey. The reply was “Our Lady of Tarrawarra, of course.” So from his ordination Mass onwards, he has always inserted the prayer, “Our Lady of the Central West, pray for us.”

In 2015, Bishop Michael asked me to write an icon of Our Lady of the Central West for the sesquicentenary of the diocese. As there was no model from which to work, I took over 10 months of research and prayer, before arriving at the final design; it took another 2 months to finally complete. It was unveiled for the Diocesan Assembly in 2016. The icon was professionally photographed, and copies were given to every parish and to members of the Diocesan Assembly; copies are also given as gifts to visiting prelates and were taken as gifts in the days when Bishop Michael could travel overseas!

Our Cathedral restoration began back in 2014, and Bishop Michael planned to have the icon installed there. This finally happened in March 2021, with a Solemn Blessing during Mass as part of the Cathedral re-opening celebrations. I was touched that there were members of the congregation who had come from hours away especially for this Solemn Blessing, as they already had a love of this icon as part of their prayer life. 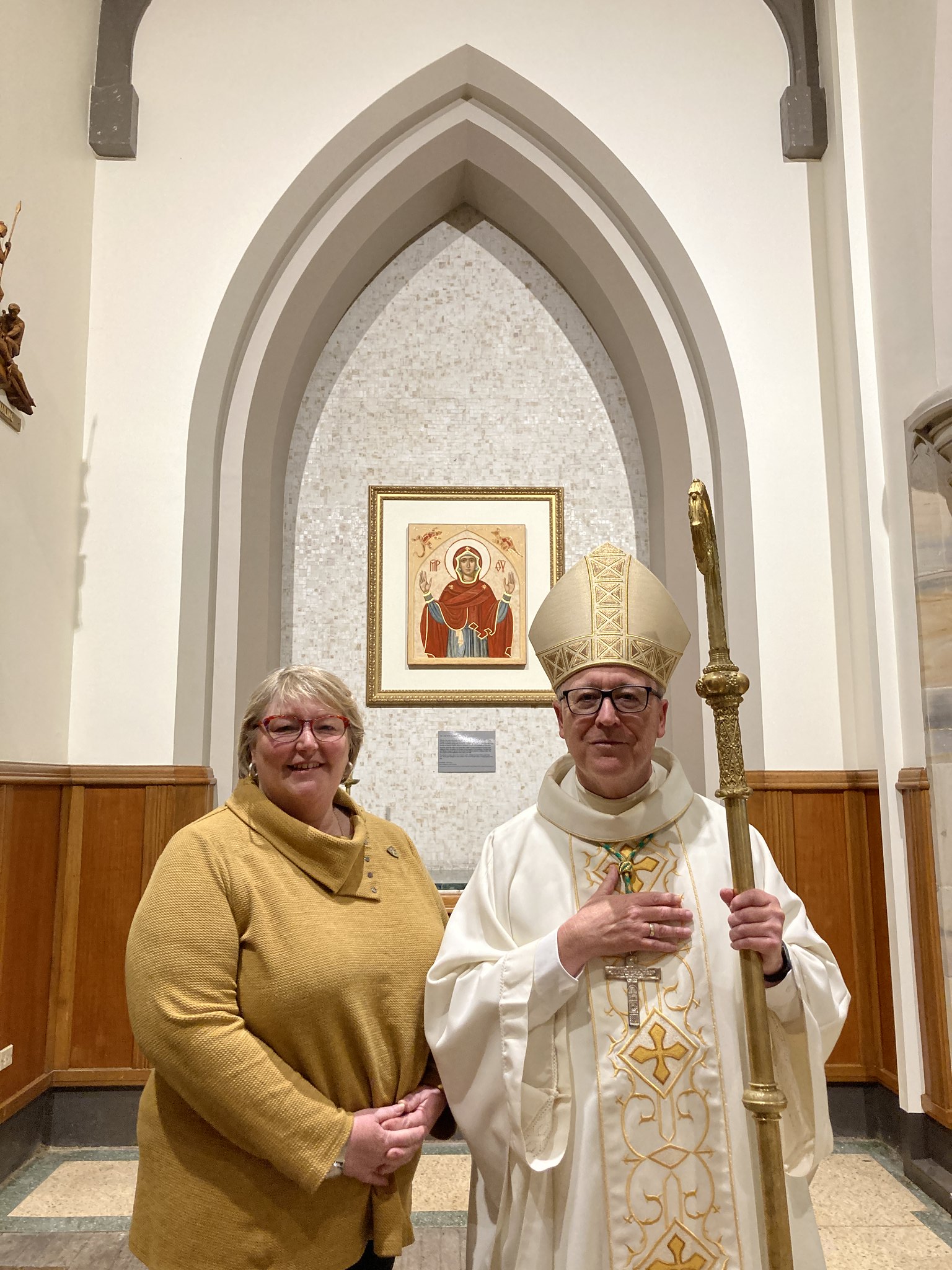 The Name of the Icon

Over the centuries, the Mother of God has been venerated under many titles. The foremost of these is Mary, Mother of God. This is celebrated as a Solemnity on 1 January. In Greek, this is “Theotokos,” literally, “Godbearer.” This is the meaning of the letters written on every icon of the Blessed Mother. 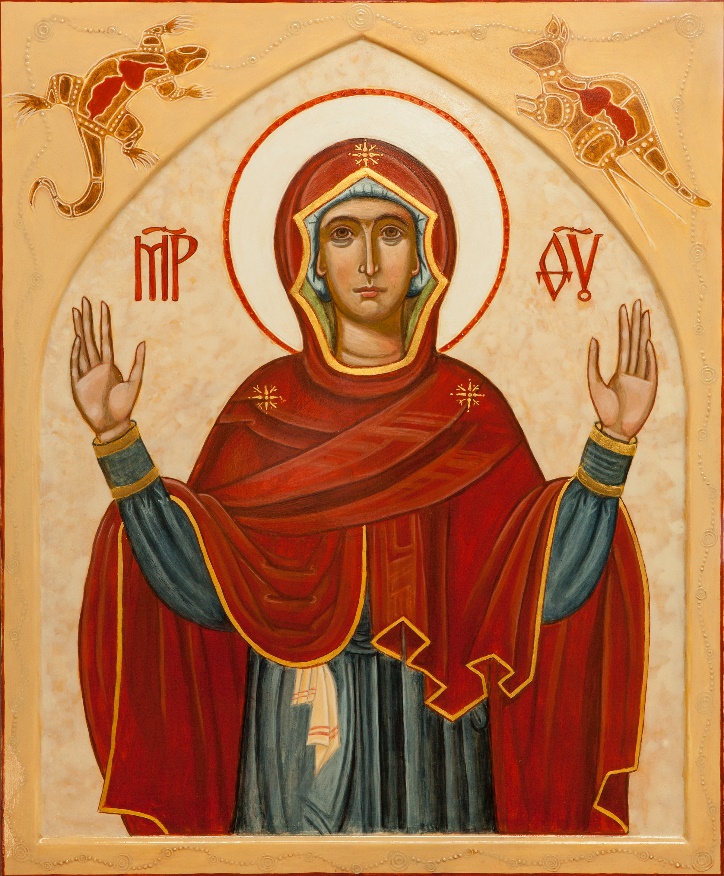 The Design of the Icon

The icon Our Lady of the Central West is in the form of the Theotokos Oranta, that is, the Mother of God Praying.  This is a very ancient, traditional form of iconography, a religious tradition belonging to the whole Church and coming from the time before the Great Schism between the Western Church and the Eastern Church in 1054. As such, icons belong to all Christians no matter where they are from or what tradition they belong to.

The border places this image in the Central West of New South Wales. It contains the totems of the two predominant local Indigenous tribes, the Goanna of the Wiradjuri and the Kangaroo of the Gamilaraay. The border also uses Wiradjuri imagery to represent the churches of the diocese joined by a pathway of dots.  This also brings to mind the significance of the Rosary in our faith.

All of the pigments used in this icon are natural earths, mainly ochres.  These come from all over the world, reflecting the widespread origins of the people of the area. The gold highlights are symbolic of the role which gold has played in bringing people to the Central West.

Understanding and Praying
with the Icon

As mentioned, the icon of Our Lady of the Central West is depicted in a traditional form called the Theotokos Oranta (The Mother of God Praying). This is a well-known depiction of the Virgin Mary in prayer with extended arms, a common posture for prayer. The Mother of God is shown in this posture in the most ancient image we have of her, which is found on the walls of the Catacomb of Priscilla in Rome, a site used for Christian burials from the late 2nd century through to the 4th century. This posture of extended arms is also a traditional form of welcome and of comfort and embrace in times of distress.

The Virgin’s solemn and static posture, the characteristic folds of her garments, and her pensive expression are all characteristics of Byzantine iconography. The clothes are quite stylised, but the face and hands are much more realistic. The Mother of God is always represented with three stars, on her head and on each shoulder. These represent her perpetual virginity – before the conception of Christ, in his conception, and afterwards.

The handkerchief on the belt of the Mother of God is popularly thought to be for wiping away the tears of those who come before her with their problems and concerns. The colours are also symbolic. Mary is shown wearing a veil typical of women of the period. The veil is red, the colour of divinity, whilst the clothes under the veil are green or blue, the colours of humanity.

Icons are always named, and often these names are abbreviated in Greek letters. Beside her head are the letters “MP OY,” an abbreviation of the Greek: “Mater Theos” – the Mother of God. The little curve line above the letters tells us the name is shortened.