Saint Elizabeth of the Trinity

Saint Elizabeth of the Trinity (1880-1906), Elizabeth Catez, was born into a military family near Bourges, France. She entered the Carmel of Dijon in 1901 dying there five years later of Addison's disease.

Saint  Elizabeth of the Trinity (1880-1906), Elizabeth Catez, was born into a military family near Bourges, France. She entered the Carmel of Dijon in 1901 dying there five years later of Addison's disease. From her earliest years she had a deep sense of God's presence in her life and determined to give her whole life and love to him. She was a gifted pianist and had a great flair for friendship, enjoying the social life of her times to the full – including following the latest Paris fashions! Her life in Carmel was brief but there she found all she desired: 'I can't find words to express my happiness. Here there is no longer anything but God. He is All; He suffices and we live by Him alone.' (Letter 91)
St John of the Cross

Her writings consist of summaries of her private retreats, prayers and her extensive correspondence to family and friends. The indwelling of the Blessed Trinity in each baptised person was the central mystery which inspired her life and spirituality:

'It seems to me that I have found my Heaven on earth, since Heaven is God and God is in my soul. The day I understood that, everything became clear to me. I wish to tell this secret to those whom I love so that they also, through everything, may also cling to God…'

Principal Events in the Life of Saint Elizabeth of the Trinity

1880 — July 18: Elizabeth Catez's birth at the camp of Avor in the district of Farges-en-Septain (Cher). July 22: baptism at the camp chapel.

1887 — October 2: death of her father. During this year: first confession.

1888 — October: first enrollment at the Conservatory of Dijon.

1893 — July 18: first prize in higher fundamentals of music at the Conservatory. July 25: first prize at the piano.

1899 — January 24 (evening) January 28: retreat preached by Père Chesnay, S.J. January 30: begins the part of her Diary still preserved. March 26: Mme. Catez agrees to Elizabeth entering Carmel when she reaches the age of 21. June 20: first visit to the parlor of the Carmel (after her mother's consent).
During the year: reads [St. Thérèse of Lisieux's] Histoire d'une Ame (Story of a Soul)

1905 — Lent (March 8 April 22): first symptoms of illness; dispensations from observance of the Rule. Mid-August: Elizabeth, weakened, is dispensed from her office as second portress. 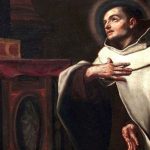 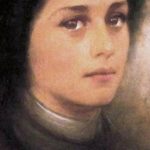